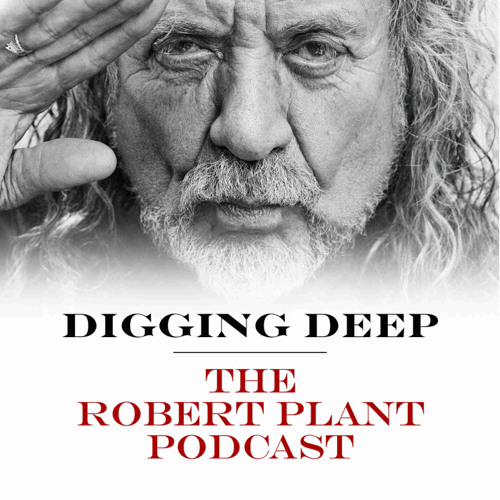 Robert Plant?s music is the result of a lifetime striding around the globe, from The Midlands to Morocco, from Nashville to North Wales, and the influences and friends collected along the way can be heard in his songs. In this podcast he'll delve into his back catalogue to revisit a track from this remarkable history to tell stories of inspiration, collaboration and intervention. It?s Robert?s personal road map to an incredible and personal journey that?s ongoing to this very day?

So here are. We?ve reached the end of another series of Digging Deep with Robert Plant. It?s been a collection of conversations partially defined by the unprecedented times we?ve been living in (and this episode touches on that) but, as always, some amazing music. We end the series with a cover version that Robert and Alison Krauss made their own on their world-conquering Raising Sand album. It?s the perfect way to end for now. And maybe it even points the way to the future?

It seemed inevitable that Robert Plant and Afro Celt Sound System would end up working together. Both trade in blending music from disparate geographical locations and find real pleasure in the unexpected results of unscripted collaborations. The only real surprise was why it took till 2001 for Robert and these sonic pioneers to get together. Fortunately, when they did. It was well worth the wait.

Musicians have growing and evolving connections when they write, perform and record together. The 4th episode in Season 4 of RP?s Digging Deep, ?13 Harps? is about two friends who decided to make some music together. It's as simple as that.

More than once on Digging Deep, Robert Plant has chosen songs by artists with whom he?s crossed paths many times over the years and this episode is no exception. The track in question is the iconic ?House of Cards', written and first recorded by Linda & Richard Thompson whose own musical history intertwined with Roberts on more than one occasion. As he'll explain.

For this episode Robert Plant has chosen a song he recorded with Jimmy Page and Rainer Ptacek in 1997 entitled ?Rude World?. Rainer was a hugely talented cult guitar hero with a unique blues folk style. This track features on a compilation to him called ?The Inner Flame? which also included contributions from PJ Harvey, Madeleine Peyroux, Evan Dando and Emmylou Harris (which tells how great Rainer was). If you don?t know his work yet, let Robert be the person to introduce you?

S4E1: Bluebirds Over The Mountain

Digging Deep with Robert Plant has returned and the start of Season 4 reunites Robert with Matt Everitt after a long enforced break. Here they discuss what a touring musician does when he can?t go on tour, some of the musical rarities and curios that Robert uncovered at home during lockdown and the matter in hand, a very special song. The track is called Bluebirds Over the Mountain, and it was written and recorded by Ersel Hickey in 1958 and made a hit by Ritchie Valens that same year. Robert recorded a version for his 2017 album Carry Fire and enlisted the vocals skills of Chrissie Hynde, as you'll hear...

So what is the identity of The Tall Cool One? Who is the mysterious figure that provides the title for this 1988 single from his Now and Zen album? Is it Robert? Is it someone else from the 80s era of stadium rock? Where does that riff come from? And how did Robert go about sampling Zeppelin and inserting it into his own music? We have at least some of the answers for you?

S3E4: Shine It All Around

This episode concerns a song taken from Robert?s 2007 album Mighty ReArranger, but as is often the case with Digging Deep, the path we take starts of with the creation of a track, but we also find ourselves discussing what songs Robert wishes he?d written, how he uses his voice as an instrument, the recent performance of Wolverhampton Wanderers and Willie Nelson?s generous nature when it comes to keeping his fans ?relaxed??

Some songs weave in and out of history, surfacing with different singers, in new versions and interpreted in different ways; each adds something new to the layers of meaning around the original. The beautiful ?Song to the Siren? is one of them. Originally written by folk hero Tim Buckley, over the years it has been recorded by Sinéad O'Connor, Sheila Chandra and This Mortal Coil. Robert added his name to the list of artists in 2002, and here he explains why, and how he approaches performing a vocal for such a famous song?

29 Palms (or Twentynine Palms as it's sometimes known) is a city in San Bernardino County, California. It nestles next to the Joshua Tree National Park, is home to the world's largest Marine Corps training base, a ragtag community of artists and musicians, and an ?electrostatic generator for the purpose of rejuvenation and time travel?. So, yes, It's an Interesting place. It?s also the inspiration behind the song that Robert has chosen to talk about in this episode?

Digging Deep with Robert Plant has returned! And this is a very special season, as for the very first time the show was recorded live in front of an audience and includes questions set by Digging Deep listeners. But fear not, the music Robert has chosen to discuss, and his own personal stories and recollections are as fascinating and honest as ever. We start with a song that Robert covered in 2002 on his ?Dreamland? album; a track that could be described as ?a post-apocalyptic psych folk classic? with an incredible history?

You?re probably familiar with the idea of musicians (especially Robert) describing their career as a journey, but sometimes songs go on travels themselves. Since being recorded for Robert?s second solo album, 1983?s The Principle of Moments, this track has surfaced on soundtracks, compilations and computer games, and even though the sound and production is a million miles away from his recent work, it?s become something of a favourite for many, many people?

In this episode we get to know the title track from Robert?s most recent album from 2017. Ably supported by The Sensational Space Shifters, it's another whirling blend of sounds and atmospheres, but lyrically it's a mysterious one. There?s definitely a romantic heart within the song somewhere, but who is it beating for? And why?

In 2010 Robert assembled a new group - The Band of Joy - and recorded an album of the same name. It included cover versions old and new by artists like Richard Thompson, Townes Van Zandt and Milton Mapes. One highlight is an interpretation of the song ?Monkey? by the band Low. This dark, swampy, mysterious recording is the focus of this episode? ?Turning way down low, telling me things I do not know I know. Tonight you will be mine, tonight the monkey dies..?

This season will be accompanied by a limited edition vinyl single box set which collects 16 tracks from across his solo career across eight 7? singles. The set is now available to pre-order: https://lnk.to/RP_DiggingDeep_Vinyl

One of the joys of this series is that we span the whole of Robert?s career so far. We also get to enjoy the rare pleasure of the man himself talking about Led Zeppelin. It?s always an honour and an enlightening experience. This episode tackles a song from their legendary fourth album. A beautiful song, a wonderful lyric and a haunting double vocal from a folk music heroine (we also find out what Robert calls the album - IV? Runes? Untitled? Four Symbols? Or what?).

We're back! A new season of Digging Deep! New songs, new stories and new journeys to take. Season 2 finds us once again in the company of Robert and this time we visit the album 'Mighty ReArranger' from 2005. There's lots of questions for us: What song will he pick? What's the rhythm of a racing camel? And who is The Mighty ReArranger? As Robert himself says, "There's stuff to say..."

In the final episode of the first series, we discover what happened when Robert Plant got into the studio with a collection of legendary guitar gunslingers like Jeff Beck, Nile Rogers, Brian Setzer and his onetime bandmate Jimmy Page, and indulged his love of early ?50s rock and roll and jump blues. We?re cookin? now Daddio!

In 2007 Robert and Alison Krauss released an album called ?Raising Sand?. Something of an instant classic, its huge Grammy-winning success is only superseded by the beautiful musicianship and stunning singing. This episode focuses on how Robert and Alison first came to work together and one specific track that they created?

The next stop on our musical map is Robert?s first post-Led Zeppelin album, 'Pictures at Eleven' from 1982. A step into brand new territory, but which featured a killer list of musicians by his side including a couple of "kick-ass" drummers.

This episode covers one of the most epic Led Zeppelin songs as Robert reveals the story and personal trauma behind the mighty 'Achilles Last Stand'. Starting our journey at the Riot House in Los Angeles on Halloween 1975, touching on the Iliad and ending up in the Atlas Mountains, Morocco.
2019-07-01
Länk till avsnitt

Robert?s next choice of song is ?Bones Of Saints?, a track from his 2017 album Carry Fire, and this week he tackles Henryk Górecki, the Welsh mountains of Bala, the dynamic behind The Sensational Space Shifters and the thumb bone of Good King John.
2019-06-16
Länk till avsnitt

S1E1: Calling To You

We start our journey with a track lifted from the 1993 album ?Fate Of Nations? with Robert looking back at the creation of a pretty bold song lifted from that record, and we also discuss why now was the right time to start this podcast series?
2019-05-31
Länk till avsnitt