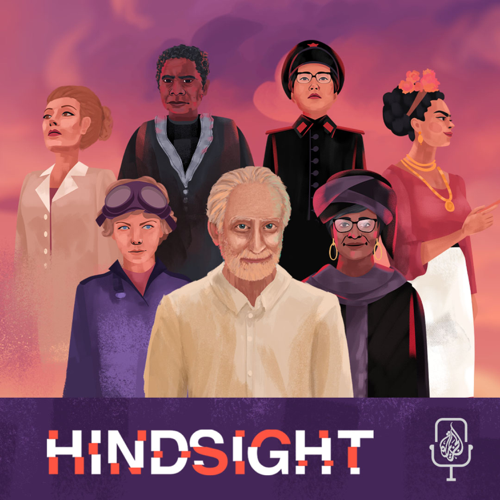 They're history’s most famous and infamous people. You’ve heard of them, but now it’s time you hear from them.

Diego Armando Maradona is often described as having been touched by the divine. But in hindsight, the man was no saint.

What do they have to say in season 5 of Hindsight?

We begin with Argentina's Diego Maradona on November 15.

Rosa Parks: The Spark of the US Civil Rights Movement

Rosa Parks is known to most as the woman who took a stand by sitting down. In the collective memory, her legacy is confined to that one day, but in hindsight, refusing to give up her seat on a segregated bus was neither her first nor her last fight for social justice.

Sani Abacha is often referred to as the worst and most corrupt ruler in modern Nigerian history. He established a reputation as someone who was good at planning coups. A kingmaker of sorts. But none was more successful, and subsequently destructive, as his own takeover for power.

In hindsight, how did no one see it coming?

Ulrike Meinhof - one half of the infamous Baader-Meinhof gang that robbed, bombed, kidnapped and killed their way across Germany in the early 1970s. In hindsight, was she a deranged terrorist who took her own life to evade justice, or a misunderstood victim of a tumultuous, mid-20th century Europe?

In the West, Pol Pot is synonymous with Cambodia?s infamous ?Khmer Rouge?.  One of the most brutal dictatorships of the 20th Century. In hindsight, was this a case of one man?s bloodthirsty hunger for power, or the unravelling of a mission for an agrarian utopia?

Augusto Pinochet: The Triumph of Mediocrity

Augusto Pinochet ruled Chile for 17 years after a coup in 1973.  Many who knew him in the years before considered him unremarkable. In hindsight, Pinochet was an accomplished opportunist who seized absolute power, then bullied his way into keeping it.

Catherine the Great: An enlightened despot?

Strong,  determined, cultured and desperate for true love.  Catherine the Great was Russia's longest ruling female leader. She was also its last. In hindsight, her rise to power was no accident.

Catherine the Great, Augusto Pinochet, Ulrike Meinhof, Pol Pot, Sani Abacha and Rosa Parks. What do they have to say in season 4 of Hindsight?

We begin with Catherine the Great on August 30.

Marie Curie: The Mother of Radioactivity

Polonium for Poland and Radium for the rays. Marie Curie was a Pole and scientist through and through. But as a woman in the early 20th century, her contributions in discovering two elements nearly went unknown.

Iva Toguri: US Patriot or Traitor?

Tokyo Rose became a household name in post-World War II United States. But the woman behind the nickname would spend her entire adult life distancing herself from the legend. Iva Toguri, an American of Japanese heritage was caught between two warring worlds and ultimately convicted of treason.

Idi Amin: The Butcher of Uganda

Charming, gregarious, ready to please. These are the disarming traits of one of Africa’s most violent dictators. For eight years, Idi Amin ruled Uganda with terrifying consequences. Switching alliances became a game and the former boxing champion liked to play.

Indira Gandhi: The Rise and Fall of a Dynasty

Indira Gandhi’s path to becoming the first female prime minister of India was inevitable. As the daughter of the country’s first independent leader, she learned from a young age the cost of fighting for one’s beliefs. But her beliefs and desire to continue the family's political dynasty would be both her making and her undoing.

For more than 40 years one man ruled Libya. Muammar Gaddafi.  He was no ordinary tyrant. Clever and creative, he designed a handbook to build a new society and woe to anyone who objected to his philosophy in life.  From national hero to a hunted recluse, Gaddafi’s ironic transition from freedom fighter to dictator culminated in a horrific defeat.

From the mother of radioactivity to the 'mad dog of the Middle East', hear from history's heroes and villains in season 3 of Hindsight. Charles Dance of The Crown and Game of Thrones returns as narrator. Have a listen to what's coming.

When Gibran Khalil Gibran was 12 years old, he boarded a ship from Lebanon to the United States with his mother and three siblings. Within a few years only two of them would be alive. Shaped by loss and a distrust of religious and political powers, Gibran's insatiable rebellious soul would go on to create his seminal work, The Prophet. But it didn’t come without sacrifice.

“...the timeless in you is aware of life's timelessness…”

As an Iranian woman, writing poetry about her own love and lust launched Forough Farrokhzad into infamy. She broke the barriers of sex and society in her poetry, but would suffer for it during her short life. Sin would get her in trouble but it would also be her ultimate salvation. So too for those desperate to read about it.

Without knowing it, you have probably heard of or read Rumi’s words before. Perhaps you were between pain and letting go or wanting and finding love. Wherever you are, the story and words of this great 13th-century Persian poet still expresses what we feel today.

“Out beyond ideas of wrongdoing and rightdoing there is a field. I'll meet you there”.

In a single move, Huda Shaarawi cemented her legacy in Egypt's women's movement. She stepped down from a train in Cairo and before a crowd, pulled back her veil. For an upper-class woman in 1923, revealing her face was a daring and decisive act. But Huda wasn't afraid of pushing the social norms.

Few are born with as much natural charm and talent as Omar Sharif. The Egyptian actor, with his gap-toothed grin, catapulted to international fame with leading roles in epic Hollywood films such as Dr Zhivago. But a gambling addiction and temper would leave its mark on his third act in life. Still, as dramatic as his opening scene in Lawrence of Arabia, listening to the story of Omar Sharif’s life is also worth the wait.

Umm Kulthum: Star of the East

How many entertainers can hold an audience’s attention for hours with a single song? Egypt’s Umm Kulthum could, but she was extraordinary - conservative, strategic and positively revered by the masses. This is the rags-to-riches story of the Star of the East. Umm Kulthum at the height of her fame was a magnet for Egypt’s upper class, preeminent poets, composers and politicians. But her rise to superstardom came with its stumbles.

In Season 2, Hindsight dives into the lives of famed writers and entertainers who did what others thought impossible. You've heard of them, now it's time to hear from them.

Thousands arrested, injured, killed. The price for a revolution in Egypt was high, but when millions across the country protested for change well, anything was possible, right?
Gone was Egypt’s strongman and in his place, an unlikely leader. Mohamed Morsi - the “spare tire” of a political wing of the Muslim Brotherhood - was in.  He was to be a president for all the people. But his meteoric rise and fall proved otherwise.

Dalida: Darkness in the Spotlight

Dalida broke the glass ceiling for women in the music industry. Her superstar status has even been compared to the likes of Madonna and Céline Dion, but for a woman loved by so many, Dalida never found her one enduring love. One tragedy after another would follow her throughout her life until her death at aged 54.  What a life she left behind.

Both Egypt and Israel say they were happy with his work, but Ashraf Marwan died under mysterious circumstances. So, someone was unhappy. A spy for Israel and possibly a double agent working for Egypt. Whose interests did he have at heart? On the day he fell to his death from a balcony in the heart of London, Ashraf Marwan made several frantic phone calls. He had something to say, but he took his secrets to his grave. Well, some of them.

Saddam Hussein was reviled and loved, and not necessarily in equal measure. His supporters say the Iraqi president was “just in his injustice”, but his victims would tell a very different story.  In 2003, his near quarter of a century rule came to an end when invading US forces found him hiding near his hometown of Tikrit. Saddam was tried on charges relating to mass murder and on the day of his hanging he remained defiant.

Zaha Hadid: Queen of the Curve

Eccentric, demanding and unapologetic, Dame Zaha Hadid was one of the most innovative architects in modern times, even though her designs and her temperament weren’t for everyone. Decades after moving to the UK from Iraq, she would finally find her place in this male-dominated industry, but she wouldn’t have long to enjoy it.

Lawrence of Arabia: A liberator, spy or traitor?

TE Lawrence became one of the most famous figures to emerge from World War I. Not so much for his role as a British intelligence officer. Nor his role in the Arab Revolt. Instead, it was because of an international photo exhibit of a young British man in traditional Arab white robes, riding a camel across the deserts of the Arab world. Whether he rejected the limelight or found himself backing into it, Lawrence's role in the Great War would serve as his own inner conflict.

Lawrence of Arabia. Liberator or a man with divided loyalties?

Ever wonder what history’s most famous and infamous people would say if you asked them for their side of the story? Now you can. In a new docudrama podcast from Al Jazeera, actor Charles Dance plays our narrator, navigating the lives of some of the world’s most memorable figures.