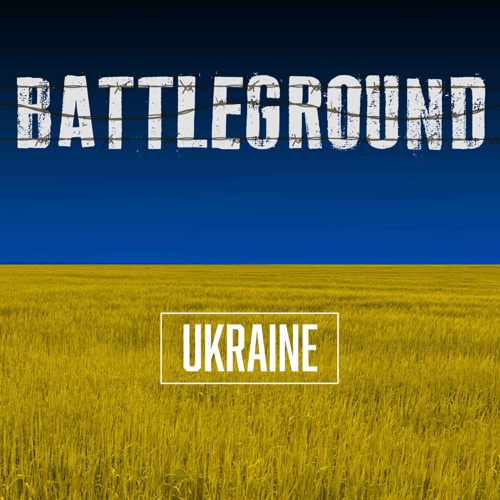 A history podcast that explores the narratives, turning points and characters that shape conflicts, encompassing a blend of social and military history. Following on from the series on the Falklands War, best-selling military historians Patrick Bishop, and Saul David turn their attention to the war in Ukraine.

It has been an eventful past week in the war in Ukraine, following the recapture of Kherson by Ukrainian forces, as well as a missile strike killing two in neighbouring NATO member state Poland. Joining Patrick and Saul to discuss all this and more is one of the most incisive commentators on the war - Professor Phillips O?Brien, head of the School of International Relations at the University of St Andrews.

This week on Battleground: Ukraine, our guest Iuliia Mendel - the former Press Secretary of Ukrainian President Volodymyr Zelensky, gives some fascinating insight about the mindset of the Ukrainian leader. She travelled everywhere with him, and was present in his meetings with Vladimir Putin. Her book just out is: The Fight of Our Lives, which sheds light on where Ukraine was going before the war intervened

With information about what is happening in the eastern and southern fronts getting harder to come by, Saul and Patrick speak to guest Owen Matthews. Owen is half Russian himself and has reported on and lived in Russia at key moments in its recent history, including since the beginning of the war in Ukraine, and he gives a brilliant analysis of how we got to where we are, and what is likely to happen next.

As developments on the battlefield have slowed down in the past week, Saul and Patrick speak to the esteemed military historian, war reporter, and former newspaper editor Sir Max Hastings, who gives his perspective on the conflict and discusses worrying historical parallels. They also discuss and answer questions sent in by listeners. Want to send a question? Send it to [email protected]

Earlier this year after Russia's invasion of Ukraine, German Chancellor Olaf Scholz committed over 100 billion Euros to modernise the German Military. Joining Saul and Patrick to discuss this, and Germany's support for Ukraine so far, is Professor Matthias Strohn.

This week on Battleground, Lieutenant Colonel Pavlo Khazan took a break from frontline action to discuss the latest Russian missile attacks, the possibility of a nuclear warhead being deployed, and what he thinks Ukraine's western allies should do.

The continuing success of Ukrainian forces has led to speculation that a complete collapse of the Russian Army could be forthcoming. This week Saul speaks to legendary Military Historian Anthony Beevor, about where the Russian Military is today.

This week legendary war reporter Anthony Lloyd, discusses the media coverage that has surrounded the War in Ukraine and how this conflict has differed to others when reporting from the ground. Plus the latest developments this past week are discussed, including the Nord stream gas pipeline "sabotage' and Russians fleeing the draft.

In light of Putin's call up of reservists, Patrick speaks to friend of the show Askold Krushelnycky, who's been in the recently recaptured areas of Ukraine around Kherson in the past week.

In the wake of the massive Ukrainian breakthrough in the Kharkiv area, and the recapturing of vast swathes of Ukrainian territory, we hear from the former head of the British Army General Lord Dannatt, who has been closely following events in Ukraine.

Saul and Patrick also discuss what this all means going forward, as well as the alleged attempt on Putin's life.

A horrifying feature of the War in Ukraine has been the atrocities committed, particularly against the civilian population. Veteran war reporter Janine di Giovanni joins Patrick and Saul this week to discuss this and the work she is doing as part of the Reckoning Project.

Environmental engineer and serving Ukrainian Lieutenant Colonel - Pavlo Khazan, joins Patrick and Saul to talk about his role in commanding C4 operations on the frontline of the Russian invasion; giving insight into a new age of warfare, Ukrainian morale and the impact of Western aid.

Russia's behavior in launching the invasion of Ukraine caught many in the West off guard, so Saul has been speaking to expert on Russian History - Professor Orlando Figes to understand what Putin's calculation may have been.

Ukrainian forces are looking to cut-off Russia's 'Land Bridge' to Crimea, with a possible large offensive being launched in the south of the country in the coming weeks. Patrick and Saul speak to Anglo-Ukrainian journalist Askold Krushelnycky, bringing up to date analysis on the geographical discrepancies in the fighting, and the considerable number of female fighters in the Ukrainian ranks.

In this new series, Saul and Patrick explore the current conflict in Ukraine. They begin by looking back to the first days of hostilities in Kyiv with BBC journalist Paul Kenyon, followed by Ukrainian-American journalist Irena Chalupa giving an overview of the historic enmity between the two countries.

Steve Hoyland, who in 1982 was a parachute-qualified radio operator in the Royal Artillery?s 148 Commando Battery, gives a hair-raising account of his time on operations with the Special Forces during the campaign.

Graham 'Piggy' Trotter recounts his time as a Navy Clearance Driver during the campaign, including the heart-stopping de-fusing of a thousand pound bomb from RFA Sir Lancelot.

With hundreds of messages received through the course of the series, Patrick and Saul answer as many questions they can and add some responses from listeners who were involved in the campaign.

With the military action over, Saul and Patrick cover the aftermath of the war and the impact it had both on the nation and the individuals who were caught up in it. They end with personal reflections on what they've heard during the course of the series, and what's coming next.

With the Argentine forces routed in the mountains, the British task force roll into Port Stanley as the official surrender finally comes. Hear memories from the islanders, and Patrick's recollection of fellow journalist Max Hastings' legendary solo stroll to the pub.

13. The Battle of Wireless Ridge

In the final phase of the battle for Port Stanley, the momentum of the initial assault continues as British forces assault Wireless Ridge and the Battle of Mount Tumbledown begins.

12. The Battle for the Mountains

As the war nears its climax, British forces launch an attack on the Argentinian positions despite savage Falkland Island winter weather in the mountains surrounding Port Stanley.

11. Disaster on the Sir Galahad

In one of the most tragic and horrifying incidents in the war for the British forces, the Sir Galahad landing craft is bombed when fully laden with Welsh Guards. Saul and Patrick explore the decisions that led to the tragedy, and the heroic defensive effort from fighter pilots David 'Mog' Morgan and Dave Smith in preventing further casualties.

10. The race for Port Stanley

As focus turns towards the capital Port Stanley, a treacherous 'yomp' across difficult terrain and conflicting priorities from commanding officers mean the British forces are left vulnerable.

9. The Battle of Goose Green

As the British forces pushed into the island from their landing point at San Carlos Water, they encountered a well-defended Argentinian position in the settlement of Goose Green, leading to the most ferocious land battle of the war. Saul and Patrick explore the controversial reasoning behind the attack, with eye-witness testimony from those at the heart of the action.

8. The sinking of HMS Coventry and Atlantic Conveyor

After British successes in landing troops on the Falkland Islands, the Argentinian air force strike back, sinking two British ships with their bombs and French-built Exocet missiles. Saul posits a new theory about the fate of the supply ship Atlantic Conveyor, raising the possibility that it was deliberately sacrificed by British high command in order to save their tactically vital carriers.

7. The Battle of San Carlos Water

The Argentinian Air Force mobilise and attack the landing British Task Force at San Carlos Water. Hear thrilling eye witness accounts from Mark Hankin, a 17-year-old Royal Marine tasked with machine gunning down the Argentinian jets, and Sargeant Dave Watkins, who was attempting get troops to shore in the cumbersome landing craft.

After journeying for weeks through the Atlantic Ocean, the Task Force reaches the Falkland Islands and begins the difficult process of a successful amphibious landing. Having picked San Carlos Water on West Falkland as the entry point, the special forces must prepare the ground for the landings.

5. The point of no return

As the Task Force leave Ascencion Island in the mid-Atlantic, making a shooting war inevitable, the British special forces turn their attention to a suspiciously positioned fishing trawler called Narwhal.

4. The Sinking of the Belgrano & HMS Sheffield

It's May 1982. British Special Forces land on East Falkland and both the Argentinian cruiser Belgrano and the Royal Navy destroyer HMS Sheffield are sunk.

Join Saul and Patrick for episode 4 of Battleground: The Falklands War, where they're joined by a former Special Forces operator who reveals his team's dramatic infiltration of the islands.

With the Task Force sailing towards the South Atlantic, how close did diplomatic efforts come to ending the war before a shot had been fired? Journalist Simon Jenkins, who was well-connected in the corridors of power at the time, explains the challenges Mrs Thatcher had to overcome, before Bob Headland, of the British Antarctic survey, gives an eye-witness account of the Argentine capture of South Georgia - another south Atlantic island some 900 miles from the Falklands. The retaking of South Georgia by British forces was the first major action of the conflict.

Once Mrs Thatcher had resolved to send a military Task Force to the Falklands following the Argentine invasion, how easy was it for the navy to mobilise in such a short period of time? Two of the key military commanders - Rear Admiral Jeremy Larken, then captain of HMS Fearless, and Major General Julian Thompson of the Royal Marines' 3 Commando Brigade, join Patrick and Saul to discuss the 'lash-up' and the convoluted command structure under the controversial figure of Rear Admiral Sandy Woodward.

1. A failure of intelligence

How did a small, remote group of islands in the south Atlantic spark one of Britain's most significant diplomatic and military incidents since the Second World War? Military historians Saul David and Patrick Bishop discuss the path that led to war between Argentina and the United Kingdom, and speak to Lord Luce, a foreign office minister who was at the heart of the diplomatic effort.

A history podcast that explores the narratives, turning points and characters that shape conflicts, encompassing a blend of social and military history. On its fortieth anniversary, 'Battleground' begins with a series on The Falklands War, hosted by foreign correspondent, Patrick Bishop, alongside best-selling military historian, Saul David.