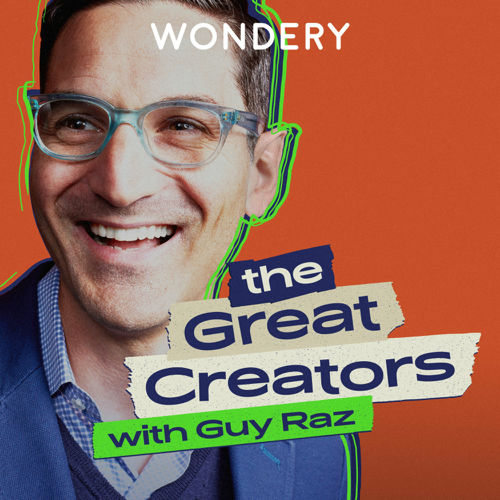 The Great Creators with Guy Raz

Become a more inventive, imaginative you. Every week, Guy Raz (creator of How I Built This) leads a deep dive conversation with someone at the top of their game. From conquering stage fright to learning to be more present and focused, you'll learn how each guest mastered their craft and ultimately became more successful in life. The result? An arsenal of tools and techniques you can apply to your own life and work, allowing you to harness your talent and become a better version of yourself.

Weird Al Yankovic: Achieving Massive Success by Leaning Into His True (Nerdy) Self

Alfred Matthew Yankovic, when he was six years old, was told by his parents to choose between accordion and guitar lessons. ?And my parents being the visionaries that they were said, ?Oh, young Alfred would love to play the accordion.?? Alfred, today better known as the chart-topping musician, satirist, and beloved nerd Weird Al Yankovic, tells Guy how that decision changed his life, and decades of popular music to come. They also discuss how Kurt Cobain saved Weird Al from a lifetime of spoofing Michael Jackson songs, and how intense the process of writing silly songs can be.

Graham Nash: Writing from Experience and Letting Your Heart Lead the Way

Graham Nash has made some of the most unforgettable music of the last century: songs like Marrakesh Express, Our House, and Just a Song Before I Go. And now, at the age of 80, he?s as creatively engaged as ever, still releasing new albums and roaming the streets of New York City in search of his next great photograph. He talks to Guy about where he continues to find inspiration, about the top-10 hit he wrote in 30 minutes, and about his famous--sometimes famously troubled--collaborations with David Crosby, Joni Mitchell, and others.

Chapter on The Hollies from a Graham Nash documentaryDispatch from a legendary 1974 Crosby, Stills, Nash, and Young tourRolling Stone feature on Graham Nash?s book of photography ?A Life In Focus?Graham Nash?s speech at Joni Mitchell?s induction into the Rock and Roll Hall of Fame in 19972012 interview with David Crosby, Stephen Stills, and Graham Nash Graham Nash?s Tiny Desk concertGraham Nash sings ?Our House? at a celebration of Joni Mitchell?s 75th birthday in 2018Graham Nash and Chris Stills perform ?So Sad (To Watch Good Love Go Bad)? by the Everly Brothers

Sigourney Weaver: Conquering Self-Doubt and How to Harness Your Instincts

Sigourney Weaver has appeared in more than 60 films, from her breakout role in Alien in 1979 and the blockbuster Aliens in 1986, to Gorillas in the Mist and Working Girl, and later Avatar, with many sequels in the works. Despite being raised by a family steeped in show business, Sigourney was reluctant to pursue acting for many years. In our conversation, Sigourney unpacks what was behind that reticence; tells Guy about her early years in avant-garde theater; talks about why, at first, she wasn?t all that interested in being in Alien; and explains why she takes issue with the idea that she tends to play ?strong women.?

Oak Felder: Making Music That Hits a Nerve and How Songwriting Can Be Like Therapy

Oak Felder is the producer and songwriter behind hits like Demi Lovato?s ?Sorry Not Sorry? and Alessia Cara?s ?Scars to Your Beautiful.? He talks to Guy about his upbringing in Turkey, why comfortable couches and blue lights help creativity, songs that bring him to tears, and how he helps artists unleash their creative potential.

Nick Kroll: The Creative Breakthrough That Led to His ?Exponential? Growth

Nick Kroll is an actor and comedian (Kroll Show, Parks and Recreation) and the creator of Big Mouth and Human Resources on Netflix. He joins Guy to talk about developing outrageous characters, playing over-the-top villains, his quirky writing process, why everyone can benefit from improv classes, and his thoughts on comedy vs. ?cancel culture.?

The Chainsmokers: How to Craft the Perfect Artistic Partnership

The Chainsmokers production and DJ duo Alex Pall and Drew Taggart are behind the smash hits ?Don?t Let Me Down? and ?Closer.? They talk to Guy about why they stopped making remixes, how they moved past a breakthrough hit that felt like an artistic failure, and how they have managed to stay loyal to each other through the highs and lows.

Audra McDonald: The Power of Taking On Work That Scares You

Audra McDonald (Master Class, Ragtime, Lady Day at Emerson's Bar & Grill) has won six Tony Awards--more performance wins than any other theater actor. (She's also won two Grammys and one Emmy along the way.) Still, each new role she takes scares her. Audra tells Guy why that fear is actually essential to her work, about her never-ending quest to know her characters better, and how it felt to have her friend and mentor Stephen Sondheim publicly pan one of her shows.

Stephen Colbert: How ?Breaking? on Stage Unlocked His Comedic Powers

Stephen Colbert has played many roles--an officious high school teacher in Strangers with Candy, and a bumbling blowhard on The Daily Show and The Colbert Report. Now, on The Late Show with Stephen Colbert, he's facing his biggest challenge: being himself. Stephen talks to Guy about working through that challenge, about the early and enduring influence Amy Sedaris and Paul Dinello had on his work, and about how Stephen Colbert the man related to Stephen Colbert the blustering pundit.

Trailer for The Great Creators with Guy Raz, which premieres September 20th.